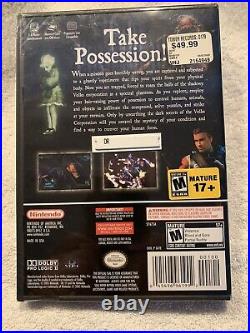 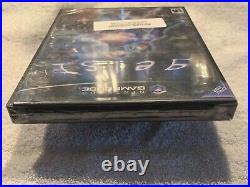 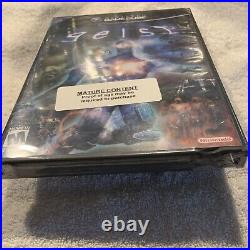 Geist Nintendo GameCube 2005 Brand New Factory Sealed. Please refer to all photos for details and let me know if you have any questions. In the hallways, labs, and chambers of a shadowy compound, an unseen power is lurking... As a ghostly Spectral Operative, players must search for their physical body, which is mysteriously being kept alive somewhere in the enormous complex. Players won't always be alone though--as they explore, they must collect the energies of indigenous spirits to help unravel a mystery and build their own power. Some will help, but beware, for not all the spirits are friendly. Prepare for a first-person adventure with a spectral twist!

You are John Raimi, a disease-control agent with the federal government, on loan to an elite counterterrorism unit. Your team is sent to investigate the shadowy Volks Corporation.

When the operation goes horribly wrong, you are captured and subjected to a ghastly experiment that rips your spirit from your physical body. You now roam the halls of the Volks Corporation compound as a spectral phantom, using your powers to scare and possess any human or animal that crosses your path. If you're going to have any hope of finding your own body, you must employ your hair-raising power of possession to control humans, animals, and objects, using the unique abilities of each to explore the compound, solve puzzles, and strike at your enemies. Different characters react to the world from different perspectives: as an engineer, you may have access to restricted areas and computers, while as a mouse you may find yourself inexplicitly drawn to mouse traps baited with cheese. As a ghost, you are invisible to humans and move so fast that everything around you appears in slow motion. While in this phantom form, you can effortlessly pass through chain-link fences or through small cracks in walls. Most importantly, you can possess everyday objects like lights, computers, and fire extinguishers and manipulate them to terrify nearby humans or animals. Once a living creature has been frightened, you can possess and control its body. Along the way, you must discover the secret of the Volks Corporation to unravel the mystery of your condition and find a way to recover your human form. Explore the compound as a ghost, then possess more than a dozen unique character types using their weapons, equipment, skills, and even memories, to complete your goals. Possessions range from soldiers with guns to dog- and mouse-like creatures that can perform specialized physical tasks.

Choose different characters and see the world in different ways. Travel through the human world virtually unseen, using your abilities to slip through cracks, interfere with electronics, move objects, and more. Face challenges from two unique angles--as a possessed human or a lurking spirit hunting its prey. Prepare for death matches with the dead in all-new multiplayer modes that combine first-person combat with unique ghost and possession mechanics.

Explore the compound as a ghost, then possess more than a dozen unique character types -- use their weapons, equipment, skills, and even memories, to complete your goals. Choose different characters and see the world in different ways - from soldiers with guns to dog- and mouse-like creatures. Travel through the human world virtually unseen, using your abilities to slip through cracks, interfere with electronics, move objects and more. Collect the energy of other spirits to help unravel the mystery and build your own power. All-new multiplayer modes combine first-person combat with unique ghost and possession mechanics. Geist by Nintendo GameCube is a puzzle-solving and first-person shooter game that was developed by n-Space specifically for this platform, and was released in 2005. During the game you play as the protagonist John Raimi, a 35-year-old government agent whose soul is removed from his body as a result of an illegal scientific experiment. In order to eventually reclaim his body, Raimi must possess a variety of animals, people, and physical objects, and make use of them to set things right again. In Geist by Nintendo GameCube, Raimi is an expert on chemical and biological threats, who is contacted by CR-2 to help in a mission to save an old college friend. During the mission Raimi is shot, and when he wakes up, he finds himself strapped to a machine which removes his spirit from his body.

Raimi's body is stored in the compound, and is possessed by a character named Wraith for most of the game, until eventually being given back his soul near the game's end. Levels are progressed through when the various stages are completed. Stages are events in the game when you have to puzzle or fight your way through to reach the next level.

Once you have completed a stage you have reached a new checkpoint. During gameplay, Geist uses a unique blend of first-person shooting and puzzle-solving action. Playing as Raimi's immortal spirit, you can wander freely through the facility to try and solve puzzles and find clues. When playing in'ghost mode' time passes much slower, and one of the side effects of having no body is that your spiritual energy is quickly drained. When the energy empties out, Raimi's spirit dissipates and passes into the afterlife. The energy is refilled when you posses someone or something. During gameplay it's not possible to pass through solid objects, like walls, so a way must be found to open doors or pass through cracks.

During Geist by Nintendo GameCube, the gameplay mainly consists of trying to find and possess inanimate objects, such as vending machines, mirrors, cans of paint, and even toilets. These objects are then used as a safe anchor for when the player needs somewhere to regenerate their energy. In order to really do anything in the game, players must try and possess living creatures. You are able to control any life form, whether animal or human, but it's not as easy as it sounds because they must be in a specific brain state.

During the game you will engage in combat with others, generally when you possess a soldier. Once you complete all the stages successfully, Raimi can regain his lost soul. Video games are a fun pastime for many people, and Geist by Nintendo GameCube delivers plenty of action and puzzle adventure. Blood and Gore, Partial Nudity, Violence.

This item is in the category "Video Games & Consoles\Video Games". The seller is "chs-schoolnurse" and is located in this country: US. This item can be shipped to United States.